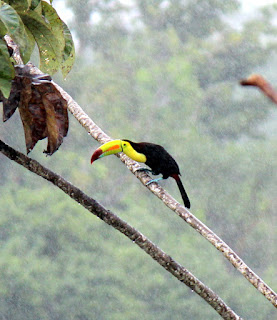 What can one do on yet another rainy day in the Tropical Rain Forest?  Well get out of bed and take some awesome pics of Toucans (Ramphastos sulfuratus) for example. In the zoo it's very easy to get good pics:  http://en.wikipedia.org/wiki/Keel-billed_Toucan 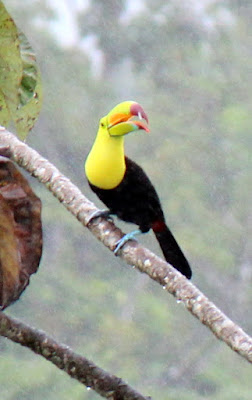 Flooding in the Barrio El Bosque 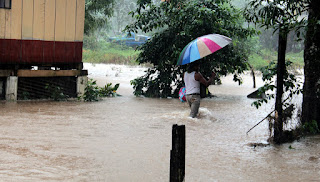 Flooding caused by rains of last week but mostly due to a faulty and badly designed bridge downstream from this photo at Hotel Costa Grande.  Have requested the authorities in this case AMASURLI and CONAP to intervene are have the owners repair or replace said bridge. 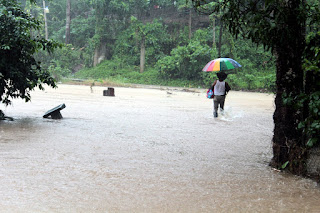 The Gentleman apparently walking on water is in fact having to cross a bridge to get back to his home! 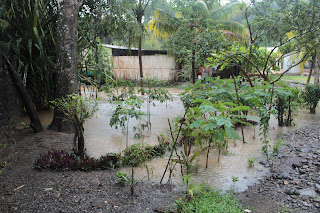 Most homes near the creek were affected as well as large areas on the other side of the road. 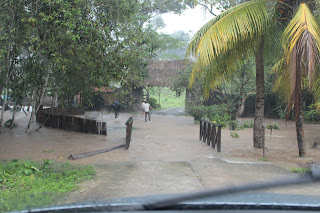 This is the bridge at the entrance to the Hacienda Tijax Farm.  The water had already gone down some 25 cm. as we could get through with the car. 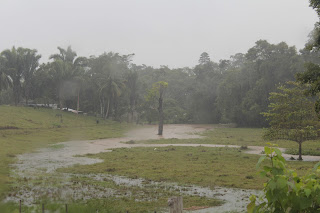 These are the pastures which fill with water and unfortunately garbage and sewage from the town.  Again the "authorities" have turned a blind eye to this scenario which repeats itself year after year with increasing violence due to "climate change" flooding has been more frequent and more severe. 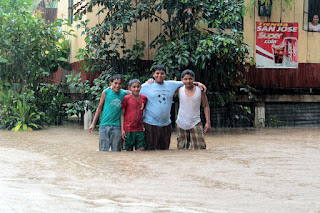 The boys of the "hood" without a care were having fun and ready to pose for the pics.

Posted by Eugenio Gobbato at 6:01 PM No comments: 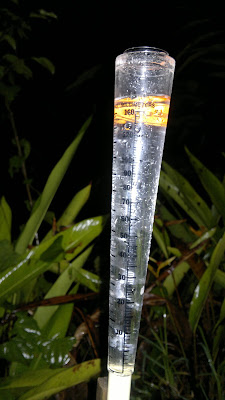 After I checked this morning nine ish.. I had 72mm on the rain gauge for the last 24hrs, which added to the earlier 29 made a total of 101 for a 48 hr. period in February.  Of course they say here "Febrero es loco y Marzo otro poco." but this added to the 474mm for January was really insane.  Right about then when the electricity went off due to a fallen post on the road.. It started REALLY raining.  From 9 a.m. to 7 p.m when I finally got back home my rain gauge was nearly overflown and it only marks up to 140mm and it was at least 1 cm above that so I figure it rained 160mm in 10 hours.  Accumulated total for the year so far is: 598 mm.
Posted by Eugenio Gobbato at 9:39 PM No comments: 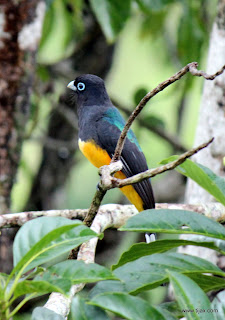 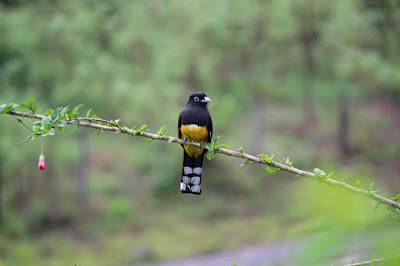 Before the deluge I got a clear shot at him-her?

Posted by Eugenio Gobbato at 11:45 AM No comments:

Now do you believe me!!


Posted by Eugenio Gobbato at 10:46 AM No comments:

Has the Earth's Axis shifted?


101 mm. in the last 24hrs. The weather has obviously shifted and is flowing west to east see link:

Since January 1st  I have registered 598mm of rain in 34 days this has to be some kind of record we will check later. 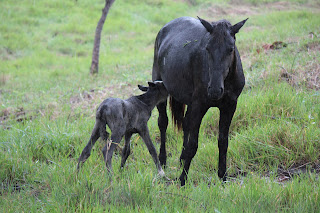 Fortunately even in the massive wetness of this environment good things happen like the birth of two colts.

And a Cricket preparing for rebirth or metamorphosis??


Posted by Eugenio Gobbato at 10:09 AM No comments: