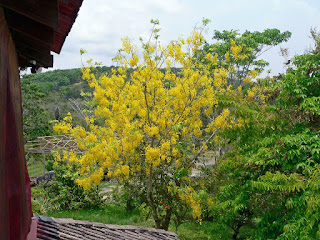 I read somewhere, I think it was "Jitterbug Perfume" by Tom Robbins that flowering trees in bloom are in fact "having sex" most trees are hermaphroditic and can successfully have sex by themselves and reproduce usually with the help of insects for fertilization of the ova with pollen, all conveniently placed in the flower. Trees in bloom therefore are having the vegetable equivalent of an orgasm and it can be quite impressive for the observer of things natural.

Juan Ponce de Leon, a Spanish Navigator and explorer was the first westerner to sail around the coast of Florida and on April 2nd 1513 after crossing open waters from what is believed to be the Abacos he sighted land (thinking it was another Island) and called it La Florida after the lush verdant shores and I bet the flowering trees, also being Catholics, Spaniards celebrated the Easter season called Pascua Florida after the Judeo-Christian tradition of celebrating passover with palms and flowers. 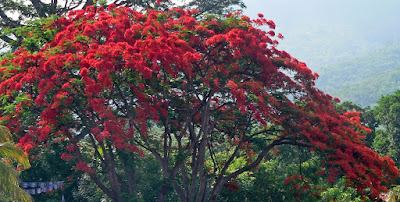 So much for hist 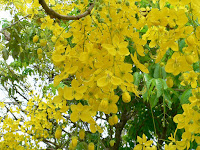 ory, the fact remains that every year around Easter the Caribbean goes into bloom from Florida all the way to the Orinoco and probably all of tropical South America. In Guatemala alone there are 38 species of Leguminous trees (Basically large bean plants) that produce very pretty flowers and which then turn into pods with bean like seeds inside. Some commonly known legume trees in the west are: Acacias, Mimosas, the Flamboyant, Guayacan, Guanacaste, Guapinol, and yes even Rosewood is a Legume. In fact leguminous trees fix their own nitrogen in the soil thanks to a symbiotic relation with aerobic bacteria which create nodules on the roots of trees and there fix Nitrogen which naturally only exists in the atmosphere as a gas. 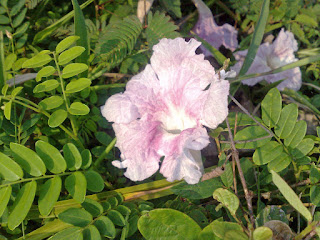 It eventually gets released into the soil in the form of ammonium nitrates by the decaying bacteria or nitrites by animals though urine, hence the smell of ammonia in rich soils and compost. Leguminous trees are thus well fertilized and often produce oily hard woods which are appreciated the world over as precious and constitute one of many Guatemalan's contributions to the Biodiversity of the Planet, courtesy of our Mayan ancestors which first identified these plants and later domesticated them and developed useful household products. Other contributions are: Corn, cotton, cacao, vanilla, tomatoes and potatoes. Just try to imagine what life would be like without these. No corn flakes, no chocolate or vanilla ice cream, no tomato sauce or ragu on your pasta or pizza, no cotton T-Shirts or sheets, no chocolate bars no French Frye with your burghers.. Awwww.. 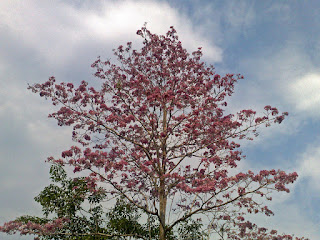 Needless to say flowering trees (and other beans, yes including black beans as in "frijoles") are an incredibly important part of the ecosystem and our biodiversity. I find that most tourists and visitors to Izabal and the Caribbean part of Guatemala barely notice this wonderful yearly occurrence of this "Planetary Orgasm" which is such a beautiful life giving demonstration of Gaia at her best. Easter always occurs around March-April but the blooms will continue into May and June till the beginning of the heavy rains. Some old timers among the locals use the blooms of different trees to foretell how the weather will evolve. for example this year the San Juan Trees are beginning to flower now ( Late May early June) when in fact they are supposed to do so on Saint John's Day which is June 24th. The Matilisguate's flowered late. Orchids and other species will also bloom around this time of the year, so for the nature enthusiast it is a time to be on the lookout. Bring out your cameras and binoculars and enjoy!!! Click on pictures to enjoy full screen view.

For more information on Guatemala's Biodiversity please look at the Encyclopedic publication recently produced by CONAP you can download chapters or the whole book, some sections are translated to English and Quiche: www.chmguatemala.gob.gt/libro-biodiversidad-de-guatemala
Posted by Eugenio Gobbato at 5:47 AM