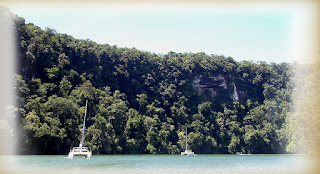 If you are reading Destination Peten you’re on the right track as you will probably reach the Rio Dulce – Lake Izabal area while on your way to the highlands of Guatemala or further south to Honduras. Izabal, now one of 22 departments of Guatemala was during the Spanish colony part of a larger territory known as the Verapaces (True Peace) as it had been colonized by Dominican Friars led by Fray Bartholomew de Las Casas in a less violent fashion than the remaining parts of Guatemala. Later in the 17th and 18th centuries Izabal became the scenery of more action such as the Pirate attacks on the fort of San Felipe de Lara spurred by the increasing trade in the Caribbean and from the Capital city to new colonial powers such as England, Germany and France. It is towards the end of the 18th century that coffee becomes introduced to the upper Polochic valley by German settlers.

The presence of the German ended with the World War II debacle and the expropriation of their farms by the government which had belatedly cast it’s lot with the winning ally forces. From then to the late 1980’s the only important event was the establishment and failure of a large Nickel mine and the opening of a road to connect the Peten with the rest of the nation as it had been isolated throughout all those years. The roadway required the building of a large bridge (the largest in Guatemala) to span the deep water of the Rio Dulce. The point is that for nearly a half a century Izabal was nearly abandoned and forgotten by the rest of the world. Lack of access and the reigning instability of the country made it nearly impossible to reach this wonderful watery playground. The hundreds of kilometers of shoreline remained forested and the lagoons, creekes and swamps that conform the Golfete and it’s tributaries such as the Chocon-Machacas remained as mirrors surrounded by lush exploding greenery with it’s water teeming with fish and wildlife. In those days it was common to see deer on the shores of the Rio and to hear the Howlers along stretches of shoreline.

Some pioneer and visionary families settled here and started small hotels such as Mr. and Mrs. Kevin Lucas of the Catamaran Hotel, Doña Sara of Tienda Reed and Abel Ramírez of the Astillero Magdalena along with the Marimonte Hotel were some of the first establishments in the area. Towards the end of the 1980 the first sailing yachts appeared on the river, ghosts of an earlier times graced once again the tranquil water of the Golfete and anchored in the nearby bays. It became evident that with the new road, the bridge and the democratic aperture of the country the area offered a pristine environment for the tourists industry. Soon other small hotels and lodges opened up for business and many more tourism related shops opened up such as restaurants, banks, mini buses, launch water tours, travel information and now even internet are available. This year for the first time a fully private reserve with an interpretative path and a canopy tour has been established at the Hacienda Tijax Jungle Lodge a pioneer Eco Tourists operation in Rio Dulce since 1990. .

Simultaneously to these developments a series of parks and reserves were created over the past twenty years making Izabal one of the best protected areas of Guatemala. Cerro San Gil, Bocas del Polochic, Sierra de Santa Cruz, Rio Dulce, Sarstun and Punta de Manabique are some of the reserves that come to mind spanning many hundred of thousand of acres. Non Profit Organizations such as Ak Tinamit, Fundaeco. Fundary, Defensores and Eco-Rio are some of the NGO’s that operate in the area, all catering to tourists interested in nature. Unfortunately the last twenty years have also witnessed uncommon growth un terms of population and recreational homes. More recently there is talk of reopening the mines, new concessions as well as oil exploration.

Soon the region will have to choose which kind of development and what sort of a future we want for our children.. The old agro industrial models of export oriented products and cheap labor may soon be a thing of the past as prices become lower for commodities such as coffee. Mining and oil would probably destroy the habitats and the nature that tourists demand to see upon their travels. Recently Izabal has made the news as protests over the proposed Oil concessions have begun in some townships like Sarstun and El Estor. Most important and what may finally tip the scales in favor of the environment is that over the years all those involved in tourism have noticed that visitors from overseas and other countries are awed at the beautiful natural sights available in Izabal, the extensive waterways, forested mountain ranges, the world class bird watching, caves, springs and lush jungle sceneries such as the Rio Dulce canyon. Hopefully consciousness of the value of nature will overcome specialized interest and the majority which already now depend directly or indirectly on tourism will prevail.

We welcome you to come and enjoy our wonderful nature and share with us the adventure of conserving our natural wonders for posterity and for a better lifestyle in the present.
Posted by Eugenio Gobbato at 7:42 AM